The change to the O1V96 console has opened up the possibility to do much more than ever before with a location sound cart. I've decided on a plan of expansion to move from an 8 track system to a 16 track system. Here's the rough details.
I will continue to use the AES card in the Yamaha O1V for the 8 channels of digital I/O, which is currently tracks 1-8 on the DEVA 5.8. My plan is to change my primary recorder to a DEVA 16, which will give me 16 tracks for recording. The second 8 input tracks will have to be analog. I will use the ADAT I/O and convert those to analog via a Metric Halo 2882.
Tracks 1-8 AES via Yamaha card
Tracks 9-16 Analog converted from ADAT via MH 2882
The routing in the O1V will be the same, Busses 1/2 for mix tracks and Direct Outs for each channel for iso tracks.
Also, in the plan will be adding 4 more wireless channels to the Venue Systems. This will make the wireless count to 12 on the cart.
I'm looking forward to this upgrade. It should be a fun project after we complete this season of Glee.
Posted by Phillip W. Palmer at 9:09 PM No comments:

As posted on the O1V96 Production Sound Users Group.
I wanted to give an update on my first 2 months with the O1V96 on location and stage. Mainly to give those that are considering this as an alternative to the analog consoles that have been the mainstay for location sound recording for many years.
Without a doubt, this has been a far easier transition than I had anticipated. At first glance, and even after a period of time, the O1V96 seems daunting with with it's menu driven control and it's software based operating system. But as you wrap your head around the structure of the console, you will see patterns and redundancy in the operation. And before too very long, it will only be as complicated as you desire your set up.
I've changed the way my routing, both input and output, a couple of times since I began. And I have settled on a scheme that is very similar to how I first started, with a couple of modifications. I use the BUS outputs as my feeds to the slots utilizing 2 layers on the console, one as the mix layer and the other as the pre-fade output layer. The AUX sends work as my routing to the OMNI outputs giving me all 4 to work with. The AUX/OMINI are for COM/IFB as well as EPK and playback outputs. It's working really well for me, and my show is as complicated as I've ever had to work on.
My power set up is currently in flux, as I am switching out my Xantrex 1000 watt inverter for a smaller unit rated at 300 watts with a 500 watt surge capability. The battery side of my power chain has remained pretty much the same since my analog set up. I like every thing to remain powered up all the time, so the inverter works like a very long lasting UPS system while working on stage. And with the 80 AH battery on board, I can go for several hours without the need for shore power. I completely see how you can run without an inverter these days, as our camera, video assist and/or DIT stations work completely on AC. It's just my preference to have the battery system in place for the comfort factor.
None of this is really new information, but just words of confidence to those that are considering the plunge to a fully digital console set up. Within weeks after I started, I sold my analog console and bought another O1V96 as my back up. I truly didn't want to have to go back to the analog set up.
PWP
Posted by Phillip W. Palmer at 2:18 PM No comments: 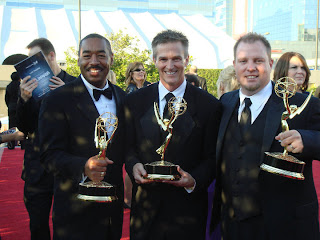 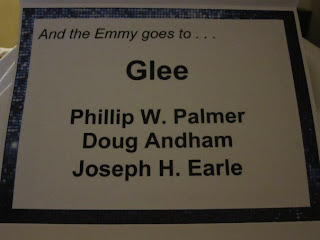 This about says it all! Thank you so much to everyone. Our Producers: Ryan Murphy. Brad Falchuk, Ian Brennan, Dante DeLaretto, Kenneth Silverstein, Alexis Woodall, Brad Bueker. My crew: Patrick Martens, Devendra Cleary, and all those boom operators who come in for our day calls. My wife Kathy Davis. And I must thank the full crew of Glee led by our Director of Photography Christopher Baffa, because it's a team effort every day. We could not have done such a job with out you.
Cheers to everyone!!
Posted by Phillip W. Palmer at 9:17 PM 2 comments:

First week with the new console

This was the ultimate test for me and the new O1v96 mixer. I practiced a bit off line, but there's nothing like the real thing. We started season 2 of Glee on July 28 and I jumped in with both feet, and the new mixer. At this point, I couldn't ever see going back to an analog mixer. Especially one that is limited to 8 input channels. The Cooper 208D is probably the best sounding mixer I have ever used and certainly owned. It performs flawlessly and is built like a tank. But for the show I'm currently doing, the flexibility of the digital mixer is paramount. I'm able to route any signal to just about anywhere, and with a little more practice I'll get faster at doing so. I've set up scenes so that if I get really twisted up, I can restore the console to my basic setup in about 5 seconds. The console sounds really good, and is really quiet. The computer interface is really useful, as I can see all the parameters in real time. I can also manipulate the mixer and it's many settings via the computer, as well as save out the console set up. I've already purchased my back up O1v96, and have it ready for the swap if anything goes awry. Yes, it's a power hog...but I can deal with that.
So far, I'm very happy with the Yamaha mixer. I'll post more info as I get deeper into the season.
Posted by Phillip W. Palmer at 12:24 PM 2 comments:

Yesterday was a big day in the Palmer household. At 5:40am the announcements detailing the nominations of the 2010 Prime Time Emmy awards were released. I'm proud to say the sound department has been nominated this year for the Glee episode 'The Power of Madonna'. I am nominated along side with the post production mixers, Joe Earle and Doug Andham. I could not have done it without the help of my sound department Patrick Martens on boom, and Devendra Cleary on playback and utility. We've also had quite a bit of help from many other USTs, boom operators and sound mixers throughout the season. I am indebted to each and every one of you.
The Creative Arts Awards, which sound is but one of the many, will be presented the week before the main awards broadcast. Our awards are on August 21, and an edited broadcast will air on E sometime very soon after.
Thank you for all the kind words over the past couple of days. This is a great time for both my crew and I.
Cheers,
Phil
Posted by Phillip W. Palmer at 8:27 AM 3 comments: 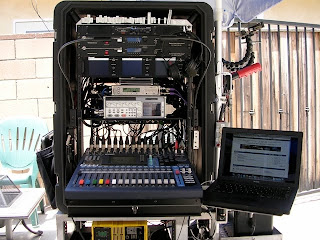 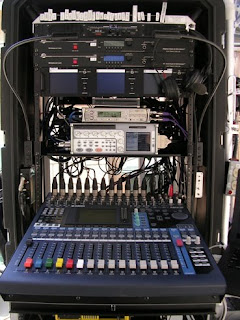 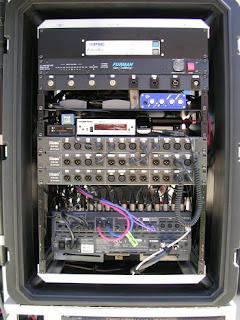 I've pretty much completed the load of gear. There are few things left to tidy up, but the signal path test through is complete. The result is far more routing and functionality. The console is quiet, endless routing and much easier to use than originally thought. It's the equivalent of a Swiss Army Knife. I'll post a more detailed list of gear and it's power distribution later and on the O1V users group.
Posted by Phillip W. Palmer at 6:53 AM 2 comments:

Cart clean up and overhaul

I haven't done all the wiring yet, but here is a preliminary look at what is shaping up. Had to do some modifications to shelves today. Hoping to have it wired up and testing audio tomorrow. There are several sound newsgroups and forums on the web currently that deal with the complete scope of production sound recording for film and television. After many emails and phone conversations during the process of my mixing panel upgrade, we felt there might be a home for a specific group that dealt with the Yamaha O1V96 and it's use as a mixing platform in location sound recording for film and television production.

Give it a look : O1V96 production sound users group

Well, it's been a couple if years. I've had time to really get to know and use my current cart configuration. Still, to this day the best set up I've put together. But my current show has taxed my mixing panel and it's routing and output ability. So, on our break between seasons of Glee...I will overhaul the interior rack of my cart and install a Yamaha 01v96 console in place of the current Cooper 206D. I am assembling all the materials and parts now, and the project will begin in about a month. I'll post before and after, as well as progress photos.
Posted by Phillip W. Palmer at 6:30 AM 2 comments:

The re-recording mixers for Glee, Joe Earle and Doug Andham, and I have been nominated for a CAS award. The nom is for Outstanding Achievement in Sound Mixing for a Television Series for the Glee episode 'Wheels', directed by Paris Barkley. The awards will be given at the annual CAS banquet at the Biltmore Hotel in downtown Los Angeles on February 27. Wish us luck!!!
Posted by Phillip W. Palmer at 6:59 AM No comments:

It was a great pleasure to see our cast and producers accept the Golden Globe for best comedy series. The other shows were so strong, and to be included in the nominations was an honor I'm sure. Ryan was kind to thank the crew in his acceptance speech...Thank You Ryan! We are so proud of the show! Congratulations to the cast and crew! And now....back to work. :) 9am call today. It should be a fun day on set.
pwp
Posted by Phillip W. Palmer at 6:20 AM 1 comment: