This past Saturday we had our CAS sponsored Parade of Sound Carts at the Local 80 stage in Burbank, CA. What on overwhelming success and turnout of both participants and their gear, production mixers, boom operators and students. It warmed my heart to see such an event so dedicated to our craft of production sound recording on location. Once again it proved to me how specialized our craft is and how we each tailor our tools to our own way of doing business. Everyone had a great time and, I believe learned quite a bit. I know I took home a few ideas for my rig.
Thank you to all our participants and to all the CAS members and the Board of Directors for putting this event on. Paul Marshall, CAS deserves a big congratulations for organizing the seminar. 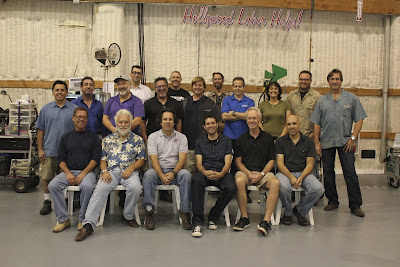 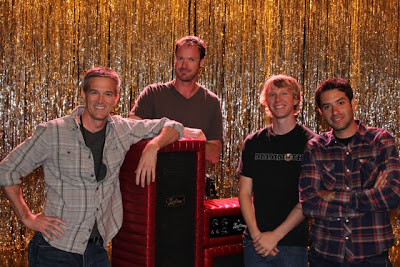 And so we begin Season 3. My crew for this go around will be pretty much the same, with the minor shuffle of Devendra Cleary moving to Playback only and Mitchell Gehbard coming in as Sound Utility for the full run of the show. Devendra will be spending his non playback days establishing himself as a mixer here in Los Angeles.
We start principal photography on Tuesday with our sound prep starting Monday. We pretty much stay ready, just some tweaking of the record and playback rigs. Looking forward to the new season and all it's challenges. I'll try and post as much as I can to give sound blog perspective of the season's activity.
PWP
Posted by Phillip W. Palmer at 5:59 PM 1 comment:

Okay, just about done with the cart re-build. A couple of things will be done, but it's just about ready to go.
Here is the cart just before we put the final patch and recorders onto the recorder deck. 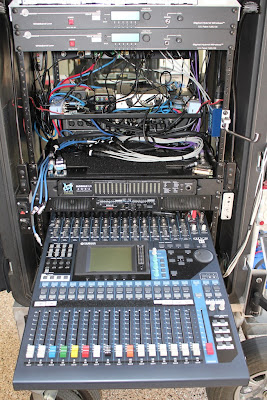 Here is the rear panel with patch bays. 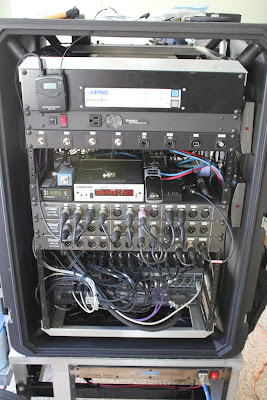 This is the front view with with all devices actually running. Computer is connected to both the MH unit via FireWire and the O1v via USB. 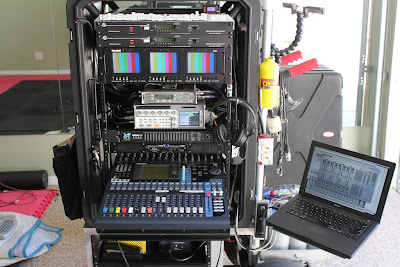 Closer view of the front from mix position. It should do. 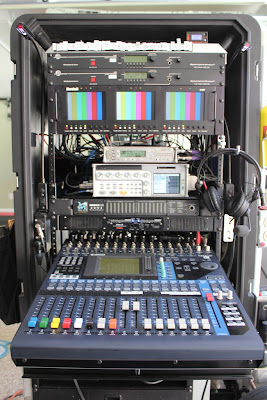 Final prep and ready for the season will be next week.
Thanks!
PWP
Posted by Phillip W. Palmer at 3:10 PM 2 comments:

I've started remounting and re-rigging the gear. The Lectro Venues have moved up a space, giving enough room for a new set of 5" monitors. The recorder platform will go right above the new Metric Halo Mobile I/O which is acting as my ADAT to analog D/A converter. 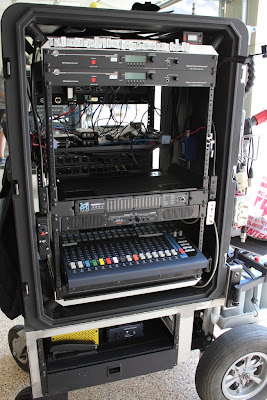 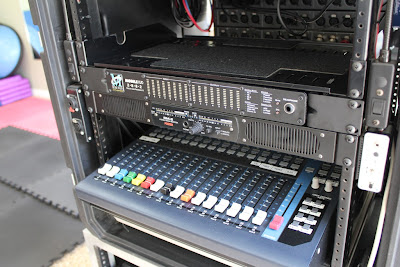 The recorder platform will hold the new DEVA 16 and the Sound Devices 702T back up recorder. I'll mount the Rollogic remote controller directly behind the 2 recorders.
On the side I have mounted the TV tuners for when I can't connect to Video Village via CAT5. They act as my back up video assist. 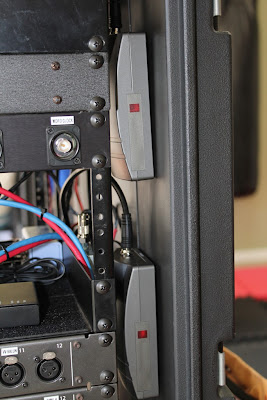 On the back of the rack, I have an accessory shelf for IFB transmitters, antenna amplifiers, power distro, 2 video baluns and a cellular modem WiFi access point. The 2 CAT5 baluns are for Video Village and for send and return from the playback rig. 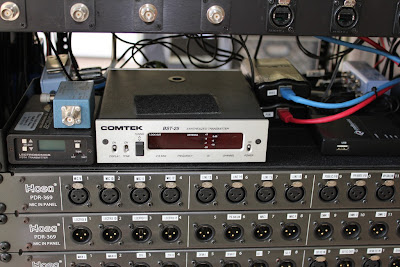 I've added a Remote Audio Shunt Box in line of my inverter to be able to remotely turn it on and off as well as monitor the battery level and amp load of the AC/DC inverter system. I have 2 batteries on board, one for the DC gear, and one for the inverter which powers the AC gear. 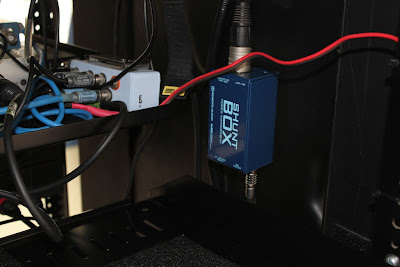 Thats where we are today. Thanks.
PWP
Posted by Phillip W. Palmer at 5:34 PM 1 comment:

I've got a few weeks off and have the opportunity to upgrade and re-wire my cart. It's an opportunity to pull all the gear out and give it a good cleaning as well. I'll be upgrading the recorder to a DEVA 16, allowing me to go up to 16 tracks. I'll have to add an ADAT to analog D/A converter to the rig to get the additional 8 tracks into the deck. I'll probably be replacing the triple 4" monitors for a triple 5" monitor rack, as my eyes are getting tired these days. Here are some stripped down pictures before the re-build.
Before: 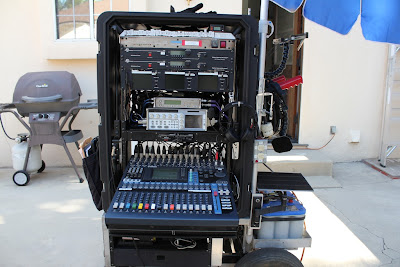 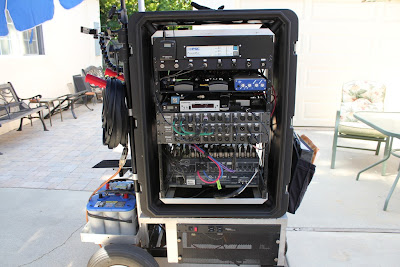 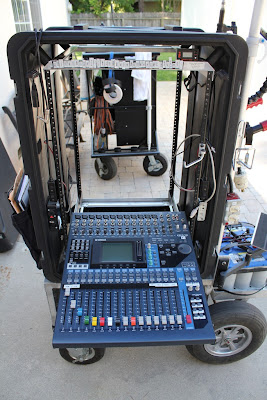 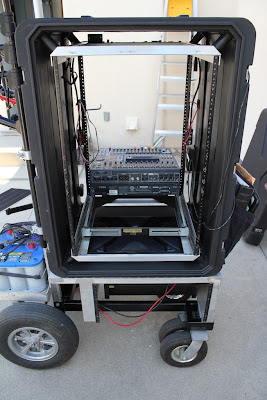 Re- rigging and remounting gear: 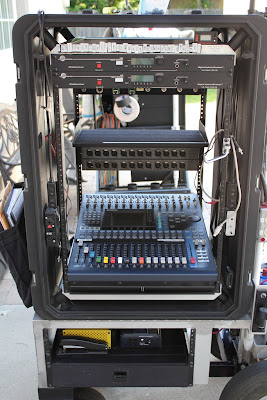 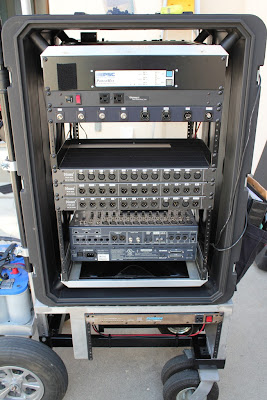 Within a week after finishing up season 2 of Glee, we began filming the FX series pilot of American Horror Story. It's being produced and directed by Ryan Murphy, so we rolled right into production. No rest for the weary I suppose.
We are just 2 days from finishing the 15 day pilot and looking forward to some time off this summer. It's been 11 months since I took any sort of extended vacation, so it's more than needed.
I wanted to thank my crew for this pilot, Michael Primmer on boom and Mitchell Gebhard as utility sound tech. Your efforts are very much appreciated.
Next up, some vacation time then a cart overhaul... I'm sure that second thing is no surprise to anyone who knows me.
Posted by Phillip W. Palmer at 6:55 AM No comments:

A bit late but in time to air...Glee season 2 has wrapped. I want to thank my crew, Patrick Martens and Devendra Cleary for a great season. Also a big thank you to all the boom operators and mixers who came in and helped out on our big days. Next season will be more of the same.
I'll see you all in August.
Next up, American Horror Story. Couldn't be farther from Glee...
Posted by Phillip W. Palmer at 6:22 AM No comments:

One month to go

We're down to the last month of filming of Glee season 2. Finishing up episodes 18 and 19, while starting 20. It's been a long road in production since last July. On the tech side, we are very happy with the change over to CF media and the pdf sound report delivery. Our Telecine tech from Encore, Michael Maher, visited the set on Friday to get a sense of what we deal with on a daily basis. He commented on how much easier the new process is for his workflow. He also talked about a new telecine audio sync process that uses ProTools and plug ins. He said the system works great. We might be seeing that on the horizon soon, especially with file based HD shows.
I'm adding some wireless to the gear package this month, spreading the spectrum out a bit more. We are probably heading to NYC for one of the final episodes of the season, so any help in the big city.
This past week we filmed musical performance #245 for Glee. Wow... Thats a lot of playback.
PWP
Posted by Phillip W. Palmer at 7:12 AM 1 comment:

Very happy to report that after a week of CF delivery we are all very happy with the results. Encore, our Telecine facility, has a system with checking in and out the CF cards with a bar code on each. Our post crew is dumping the files to hard drive and Technicolor is swapping out hard drives weekly. No one seems to miss the DVD-RAM's at all, which was my hope all along.
The PDF sound reports are the big hit. Not only are they easily read and shared, but they are attachable to the project and searchable. Search for scene 23B, and the proper report shows up with all the details. 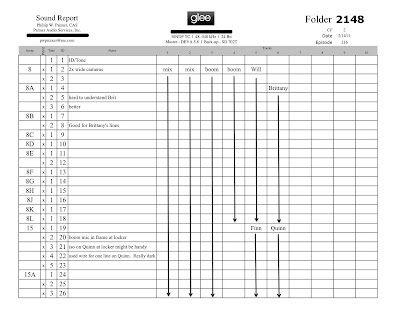 ...at least on Glee. Since the pilot of Glee we have used DVD-RAM media our our primary delivery of sound recordings to telecine and post production, as do most shows in network television and motion pictures. At least here in the United States. For years now I've had the desire to move away from DVD-RAM, to a more efficient, less fragile, higher capacity media like Compact Flash or other solid state media. Beginning with our episode 216 of the second season, we'll be giving that a go.
Over the past several weeks I've been doing tests using Compact Flash media with our post production facilities and personnel. Our telecine process at Encore in Hollywood uses MTI Control Dailies which uses a computer as it's source for sound. It will see anything on a drive, if properly formatted, as it's audio and can sync up accordingly. We are not limited to the Fostex DV-40 as our audio source, that being DVD-RAM only. We ran tests this past week with both Master and Back-up CF and the cards read fine. We are also not limited to track count, which has been an issue at times with the Fostex machines.
Upon completion of the telecine transfer and sync process, the CF cards are returned to Glee post production where they are dumped to a Hard Drive to await the weekly swap out to Technicolor. Technicolor can then routinely store and log all the audio media for dialog edit after picture lock. No more waiting for picture, then all day dumping slow DVD-RAM media onto a server for the DX.
The new Glee sound delivery process:
Here's the new process:
1) I record to CF, both Master and Back-up. The Master CF will have the multi-track and the Back-up CF will have only a 2 track mix.
2) Encore will receive these CF cards in the same manner as we did with the DVD-RAM media and telecine as usual.
3) When Glee post picks up the HD edit master, the previous day's CF cards and case will be picked up from Encore.
4) Glee post will then copy the audio files from the CF cards to a Hard Drive supplied by Techinicolor.
5) CF cards and case will be returned to set. I'll have 5 sets of cards in rotation so there is no time pressure on returning.
6) Weekly or periodically, Technicolor will swap out the Hard Drive from Glee post.
An additional change will be the use of pdf sound reports. I will be creating my reports via my laptop on set and sending them to all who need it via email at the end of each day. The same report will be placed on the Master CF drive.
I'll report on how this process is doing after we get it going for a while. I'm looking forward to it.
PWP
Posted by Phillip W. Palmer at 7:02 AM 4 comments: