It's official, we're done. Threshold has been pulled. We will finish the last and 13th episode the week after Thanksgiving. Too bad, there was a lot of potential there. Great group of people to work with.

When one door closes, another opens. 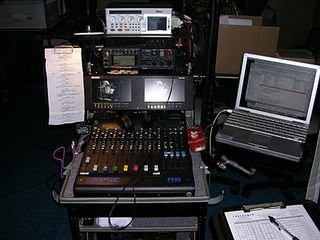 The somewhat current view of the sound cart

Posted by Phillip W. Palmer at 8:00 AM No comments:

We had a little fun with Brent and his trailer... 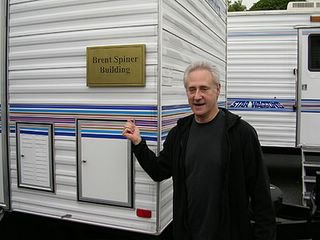 Posted by Phillip W. Palmer at 7:56 AM No comments:

Yes, I know it...it has been months. The TV series grind is quite tough, and I just haven't been motivated. So...there, I'm back.

We are on episode 12 of the 13 show order of Threshold. We have no idea whether we are doing any more, as CBS and Paramount are waiting to see how are ratings do on our new night...Tuesday at 10pm. Watch please!

Shows are getting very interesting, lots of action and alien goings on...

On the gear front, I tried Metacorder...didn't work for me. It was frustrating trying to marry consumer, "prosumer", and professional gear all into one recording device. The audio interface was the most troublesome for me, as I tried the Edirol UA25 first. It inducted all kinds of noise, mostly from the Mac Mini. The sound of processor whine with every thing the computer tried to do was annoying. After trying the Traveler, it was less but still there...and all I really wanted was a back up device. I've got a DEVA as my main recorder. I pulled the computer, monitor, keyboard, track pad, power supply, audio interface and pile of cables off the cart, and put a Fostex FR2 in it's place and it works great. I pop the CF card out and burn a disk, same time as it would take with Metacorder, and I'm out the door.

Since I spent so much money trying to get the Metacorder to work, I will continue to experiment with it. Hopefully it will work in another form, perhaps with a laptop.

Cross your fingers for the show pick-up!