Ooops, sorry it's been a while. We've been hard at work with the drama/series Jericho. Patrick Martens has taken a break until February, so we have Mike Piortrowski on boom for a while.

I've added some equipment to the cart, mostly enhancing the wireless set up. Just this week I installed an antenna multicoupler that allows my spare wireless units and my Lectro Sixpack to run on one set of antennae. Seems to be working well...I like having my spare units ready for when big scenes require more than 6 wires. This happens daily...

The Sound Devices 702T has new software that allows for simultaneous recording to compact flash and DVD-RAM. I've only had a couple of hiccups in this system, a re-boot has solved the problem. Hopefully new versions of the software will stabilize the process.

I tried the demo version of the MIX12 from Zaxcom and was not impressed with some of the key features. I'm sure this will be a very nice product for some, but not for me. The gain, navigation and lack of inputs and outputs on the main control surface are big issues. If the DEVA has problems or locks up in any way...you can't swap out to anything other than another DEVA. Also, there are no dedicated headphone or IFB feeds, like on every other location mixer. You lose one of the analog outputs for each of these feeds. I found that you needed to run the input trim almost all the way up to get a normal amount of gain that we are used to on the analog panels commonly in use.

After a demo of the Cooper 208D and the Zaxcom Mix12, and careful thought about the Sonosax SX-ST...I have decided on the Cooper 208D. The sound and function of the mixer is unparalleled by anything out there. Purely a subjective comment on my part...I just like the way it sounds.

Here's a pic of the current sound crew on Jericho... Keep watching...please! 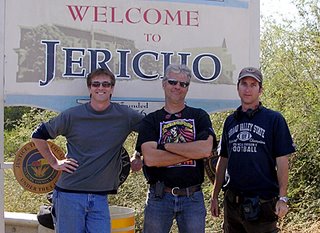 Here are three pictures of the sound cart as it lives on the set of Jericho. It's usually quite smokey on the set, so it looks like I'm in a fog...which I am. 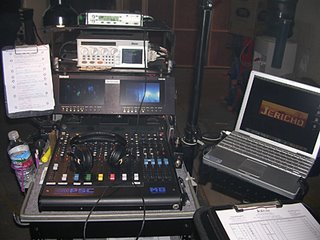 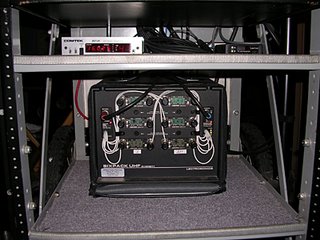 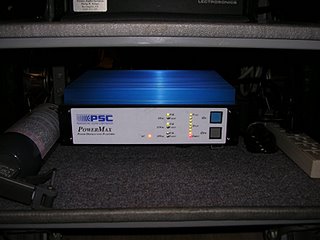 Oops, I almost forgot the follow cart. Also known as "the bus" 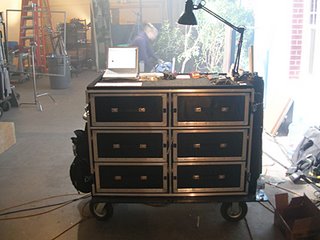 We're into episode 6 right now. It's the week of Labor Day, and our season premiere is just 2 weeks away.

Not much to report, except we've been hard at work now for over 9 weeks. We've settled into a pretty good groove, but the days are still long. Pretty much as expected.

We are a couple of weeks into the season of Jericho. The HD camera systems have gone through a bit of a change, we started with Fiber Optic links....and ditched them after 3 days. The Telecast system that we tried was definitely not ready for film style production. Too many variables and too delicate of a system to operate in the rough and tumble world of episodic television.

I have basically stayed the course, with recording master tracks on my DEVA...sending a mix track only to telecine. Backing that mix track up on a Sound Devices 702T, and burning a DVD-R at the end of every folder change on the DEVA. All DVD-RAM and DVD-R numbers remain consistent. All mix and iso tracks from the DEVA are dumped to an external hard drive, then sent to sound editorial at the end of every episode. Hope that made sense.

We are about halfway done with the second episode and all seems to be working smoothly. ;)

Patrick Martens and Jeff Zimmerman are my crew, and working quite well and hard. Doing a great job!

PWP
Posted by Phillip W. Palmer at 5:27 PM No comments:

I will be starting a new series for CBS this fall, not returning to Medium as earlier reported. My crew and I will be joining the production of Jericho, airing on Wednesday nights. Patrick Martens will be joining me as boom operator and Jeff Zimmerman will be returning as sound utility. We start production on July 19.

Changing a couple of things on the cart, most noteably using a new Sound Devices 702T as my backup machine. The Fostex FR2 will be used for run rigs/special effects/ADR and wild lines. It will be nice to have a totally separate rig for these things, not having to strip anything from the main cart.

I need to post a new picture of the sound cart. I'll try and get that together before we start production. Prep will start right after the July 4th holiday.
Posted by Phillip W. Palmer at 7:22 PM 4 comments:

I've taken a few weeks off after we wrapped Medium. I'm just now thinking of getting back to it. There are a few new developments to the sound package, but I'll leave those to a later and more lengthy post.

As things stand right now, I'll be heading back to do Season 3 of Medium for NBC. We've been pushed to a mid season show, so our start date is August 2...which is just fine by me. I thought we'd be back at it sooner, but the extra time will allow for some much needed rest.

Patrick Martens will be joining the crew this season as boom operator. Jeff Zimmerman will still be putting up with me as my utility sound tech.

We finished up season 2 of Medium last Thursday night, with a rain scene on stage. Yes, that's saving the best (worst) for last. We made it through, knowing that summer vacation waited at the end of the shot.

I'd like to thank Jeff Norton and Jeff Zimmerman for their tireless work and constant support. They've stuck with it through my constant pressure to deliver the best sound we know how. Everone gets their money's worth...and then some! Also, there were some other players through the season that helped out: George Flores, Mike Piotrowski, Rocky Quiroz, Patrick Martens and Devendra Cleary jumped in when called on. And a big thank you to all those I might have missed...

Who knows what awaits for the next project. Medium has been picked up for another season...we'll just have to see if I'm invited.

Going to make some minor equipment changes, probably just a back-up recorder change. The Sound Devices 7 series HD recorders will have Firewire hosting completed soon. This will allow me to mirror record to DVD-RAM while on the cart, and not have to wait till the end of the day. A big help when the driver is standing there waiting for the sound to go to the lab.
Posted by Phillip W. Palmer at 7:33 AM No comments:

Okay it's been way too long since the last post. We're still on Medium, and will be filming till May something or other. We're a bit behind, but making it...

Still planning on my trip to NAB this year, hopefully I'll find a mixer that I'm happy with...both $$$ and feature set. There seem to be some offerings from several manufacturers, so we'll have to see. The RAMPS party should be fun as well.

I have a gripe toward the manufacturers of the current compact flash recorders. I don't know why they haven't made any headway in the mirror process. The standard of delivery for telecine is either DVD-RAM, DVD-R or CD. None of the CF recorders provide for this media, therefore the user must transfer via computer or direct burn device. This requires space, time, and extra equipment. I envite any and all equipment manufacturers to sit with me at the end of the day, and watch the flurry of activity, loading and packing of equipment, while I wait and burn the days work on to DVD. They will then understand why we need this to be addressed. All in all, it's still better than a DAT machine...but PLEASE!

A day out at Ventura Farms: 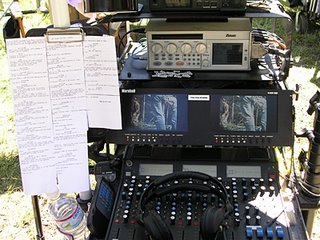 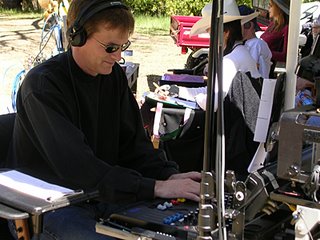 A few new developments. We've been asked to remian on Medium for the rest of the season. It's a great crew and company, so we are thrilled to join full time.

The new accessory cart, shown in the previous post, has turned out to be PERFECT! It is just the right size, though I was a little scared. The guys really like having all the room for gear. It's funny, all the stuff we had crammed in and on the Rubbermaid filled the drawers on the big cart just fine.

Starting to think about the next addition to the main cart. It has been time to change my mixer for quite some time. The PSC M8 has served me well for many years, but I must move on. Right now it is between the Cooper 208D and the new Sonosax.
Posted by Phillip W. Palmer at 5:22 PM No comments:

We're back to work after the holiday break. We started back with a 2 day, short week...all things back to normal next week.

Newest addition is my accessory cart. The modified Rubbermaid cart was getting so full and cluttered that is was hard to work off of. The top was always crammed with junk that there was no work surface. I took the dimensions of the Rubbermaid and added a few things, and had Encore cases build me a new cart. Here it is: 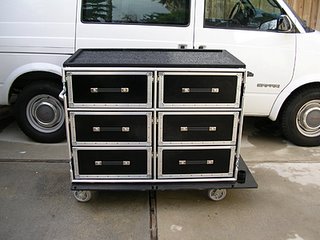 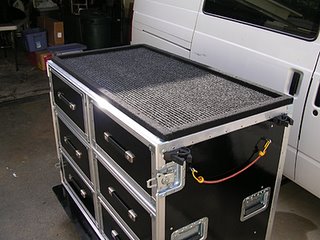 Hopefully it wont prove to be too big to move around. We'll just have to see.

We've got about 3 weeks left on Medium before we hand it back over to Kim Ornitz and his crew.

PWP
Posted by Phillip W. Palmer at 6:48 PM No comments: